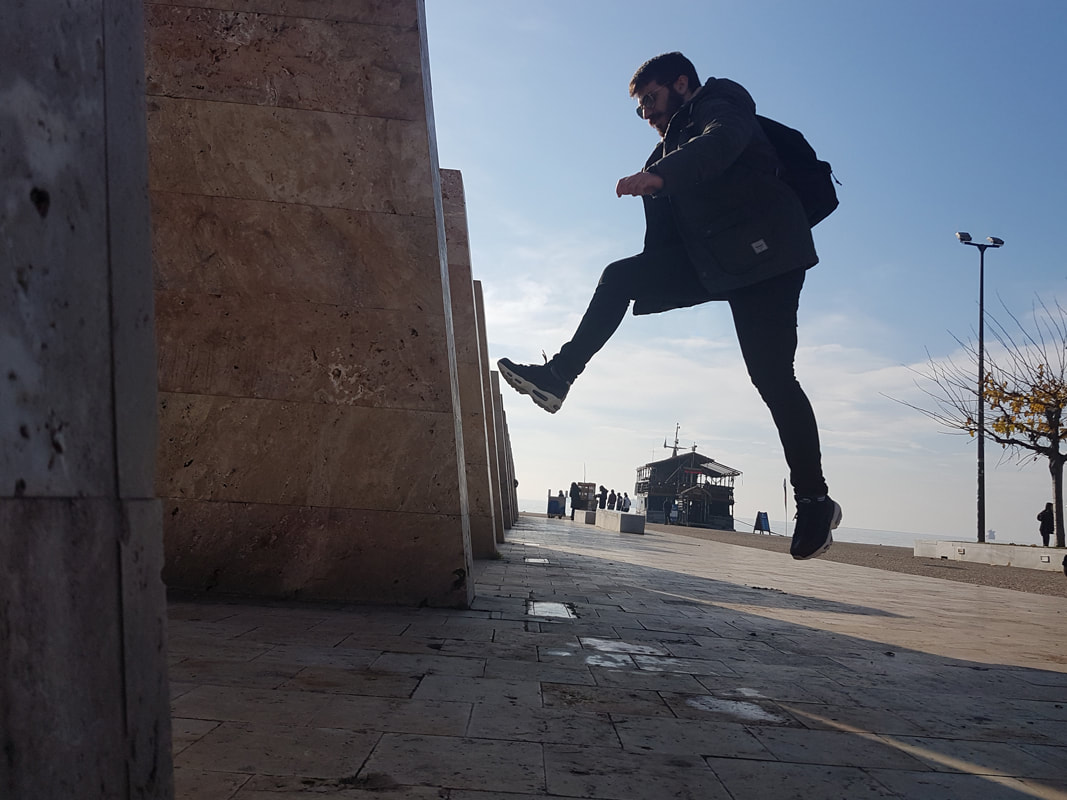 Mick and the Girls™ (that sounds like a jazz band) were going to Thessaloniki for the weekend so I kinda kindly offered to join them? I'm usually very awkward around people that I don't know personally, but the girls are Mick's friends and, well, I know Mick so the whole trip felt good.

We stayed at Mandrino Hotel. It's cozy and very modern, interior design-wise, and the whole vibe was very warm and positive. The rooms are small but adequate, with a nice balcony that had an old cinema-like hotel right across the street (photo below).

The hotel outside my window
In general, Thessaloniki was a true inspiration. The whole place is full of energy and art, it could be the sea, it could be people's vibes, if I'm honest I fell in love with this city and if I should the Athens vs Thessaloniki debate, I'm all for team Salonica. And when you walk at night in the main street, you feel that energy even more.

You know very well we went for food a couple of hours after we settled in the hotel. Ouzo ston Pinaka is a great option for that. The tables outside are in the pedestrian zone, mixed and blended with the tables of the other nearby taverns and all together they create an outstanding energy. You immediately feel the Greek hospitality and its very heartwarming. Don't be afraid to order freely, platters to share are delicious and you will be full before you know it.

The next day we walked by the seafront and that's basically Thessaloniki for you. The seafront is an enormous frame for magnificent photographs, and at dusk is even more beautiful (see gallery above). Actually the dusk found us in a cafe inside a "pirate" ship, that had its very own pirate who was very eager to take pictures with The Girls but a bit bored for a selfie with me. Go figure.

For lunch we walked around the city just to find Brothers In Law, and later we found out we actually had a Brothers in Law restaurant much closer to us, but alas. It's a super beef burger with bacon and cheese (gallery above), no wonder its a hotspot in Thessaloniki. Then after more walking Mick and The Girls™ insisted on visiting Valentino. Let me tell you some things about Valentino; it has the best crepes in the city and they're humongous. White chocolate, strawberries and biscuit for me to go, and the instructions are "You Press, You Suck, You Bite" and truth is, you must follow them otherwise it drips and now the whole thing sounds very dirty so I'm gonna stop. Incredible crepes, people, focus on that.

Now, at night, we went spot-hunting, by which I mean we scouted a location for a certain spot so I could take a picture under a red neon sign.

The next day in the afternoon we went to see the famous Umbrellas-ellas-eh. The sculpture was designed by Giorgios Zoggolopoulos and was exhibited for the first time at the Venice Biennale in 1993. It's very commanding and impressive and has a crowd surrounding it almost non-stop.

You know what else is great? Thessaloniki around Christmas time, where Aristotelous Square becomes a Christmas fair full of lights. It gives you the opportunity to take amazing pictures.

If you're visiting Thessaloniki, stop by Ypogeion Est. 2012, which is basically a cafe / bar at the Olympion Complex and is, well, on the basement.(Ypogeion = Basement, in Greek). It has incredible ambiance, great interior design, low lights and candle lights

Late at night and we had to experience a night out in Thessaloniki. CLUBVOGUE was the pick I don't know if you've ever been to bouzoukia in Greece, its a club where a singer or two have residencies. Anyway, the place was great and we had great fun but I can't tell you more because I'm mentally an 80 year-old and I was sleepy once midnight had passed.

For our last morning in Salonica we had to visit Estrella, the famous brand of brunch restaurants that started in Thessaloniki and expanded in Athens and in Cyprus. It has all those bold choices for pancakes and we love food so... yeah. You want to know what we had? We had chocolate pancakes with cotton candy on top of it and its as extravagant as it sounds.

The song pick is of course this one: