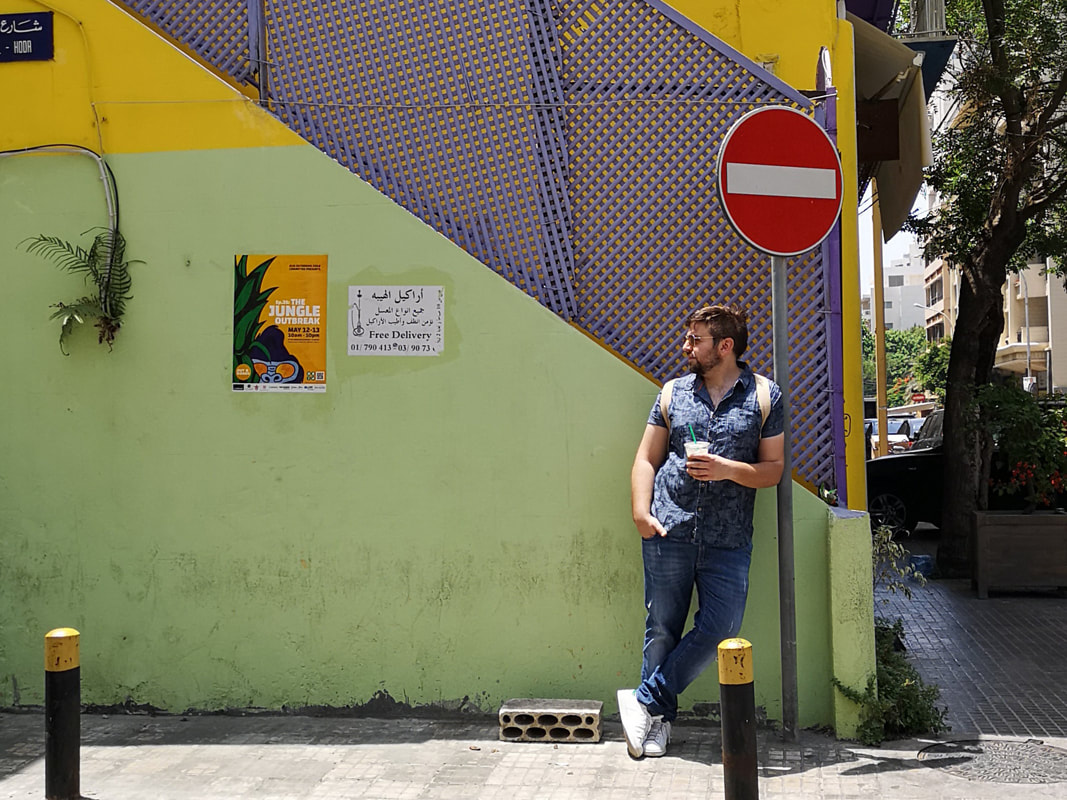 1. We walked... A LOT.
2. It's pronounced BAY-ROOT, as I told Mick during our first day there.
3. I had Shakira's "Eyes Like Yours" in my head (you know, the lyric ''came from Bahrain got to Beirut" etc etc)

Let's get this started.

I was looking for a destination near Cyprus and with relatively cheap tickets. Beirut is only 45 minutes away by plain, you get in the plane and before you can fill the visa form you are told to buckle up because we're landing. That is a great feeling for someone like me, who stresses a bit too much in airplanes.

There is some confusion at the airport. If you've never been to Beirut (I don't know if the same thing is happening in other Asian countries), the Passport Check and the Visa Check area is bit confusing because there are about 10 or less cubicles and it's unclear which cubicle is for Passports only and which ones are for Visa. Nevertheless, the queues were long but the actual check is easy and fast.

And I was stamped. I understand that when they stamp your passport in Lebanon you cannot get into Israel and vise versa, thank you politics.

Once you're outside you feel the humidity to your bone. We found a taxi quite fast to get to Studio 44, where we would be staying. Mick discovered it, I was against it, I actually loved it later. It's a furnished hotel apartments thing, every room is actually a small apartment with its tiny kitchen area. Everything was clean and the reception men were friendly and polite. We were at floor number 4, if you're wondering.

We later discovered that Studio 44 was actually in a road parallel to the Hamra Street, which is a central to Beirut with cafes, stores and restaurants. Jackpot.

It was after midnight, so all we wanted was sleep. The adventure begun first thing in the morning.

Beirut was my first experience outside Europe so I was pretty lost. Mick bought a SIM card, which was the only way we could get signal or mobile data, then we started walking.

We were at the center of the city, which you could see it was in the process of rebuilding itself after the war. There are earth tones everywhere, people trying to sell their products outside their small stores, people walking around, a mixture of people in djellaba and burka and men in modern clothing. Our destination was Zaitunay Bay and we would not get there soon.

Okay let's be hoenst, we had no idea where we were going. After a half an hour walk, extreme humidity and heat, we got to the American University of Beirut which, funnily enough, was the most Arabic-style building we had seen. A building with palm trees and arches, it was begging to be photographed.
​ 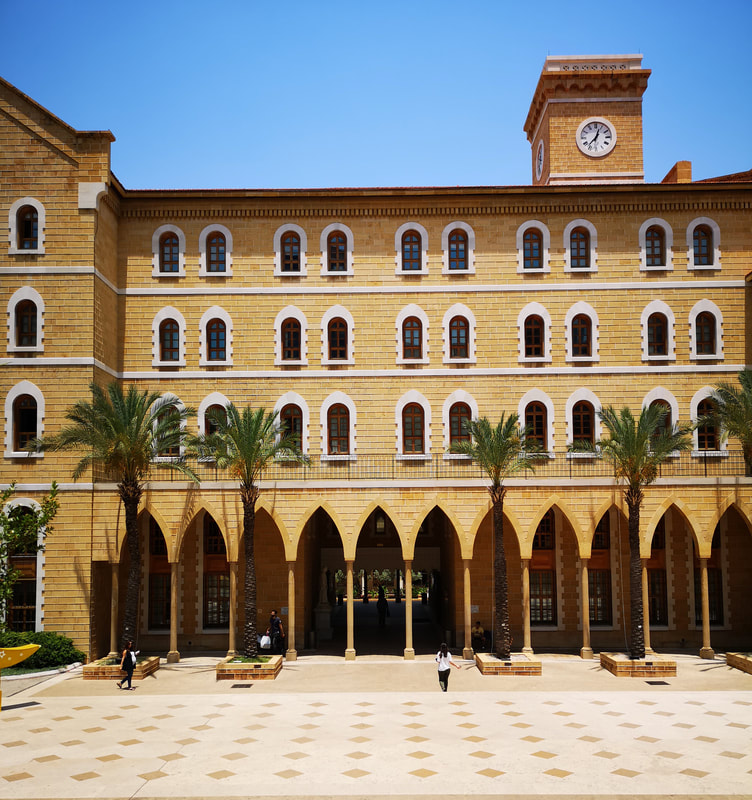 Then we came across a group of Lebanese praying in the middle of the street, and that's when you truly realize that this is your first time outside Europe.

We walked for 3km near the sea (in humidity, in June) only to realize that Zaitunay Bay was on the opposite direction. I did that. People were at the rocks by the sea, swimming or enjoying the sun (the sea was not the cleanest) but it was outstanding how they were enjoying their summer, not caring for the passers-by. That's when the pronunciation game started when Mick asked how Beirut is pronounced.

Three hours later we were back on the right track for Zaitunay Bay, after a small break at Starbucks. You were slowly starting to realize you were walking into the more modern part of the city. 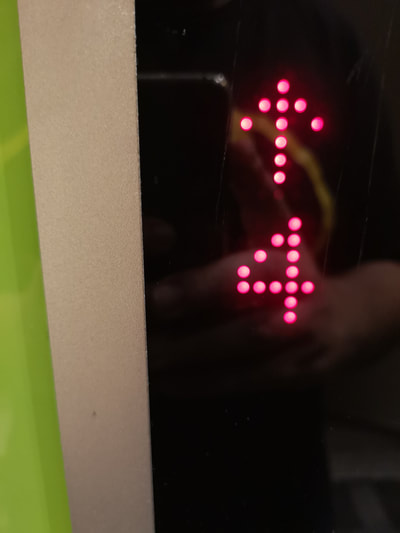 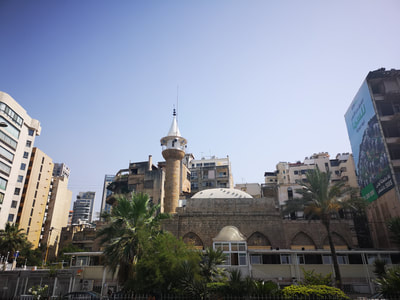 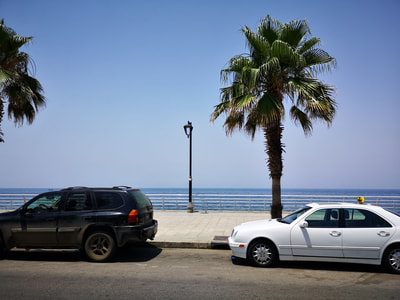 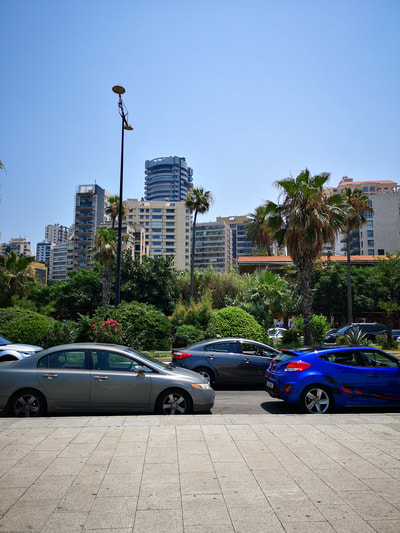 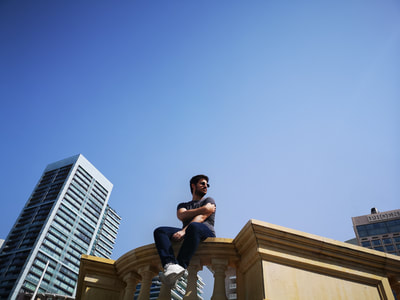 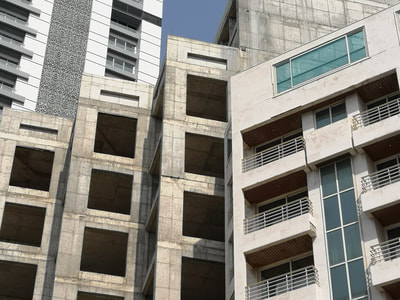 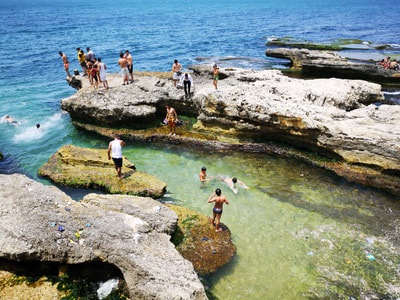 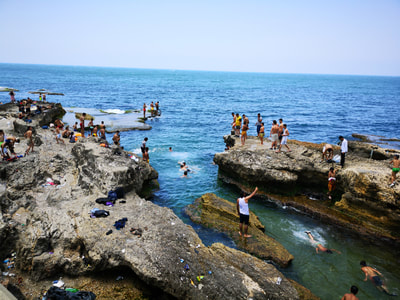 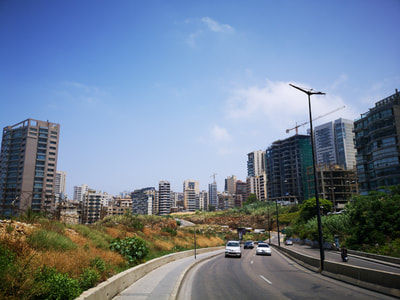 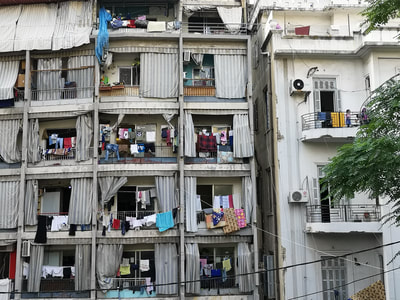 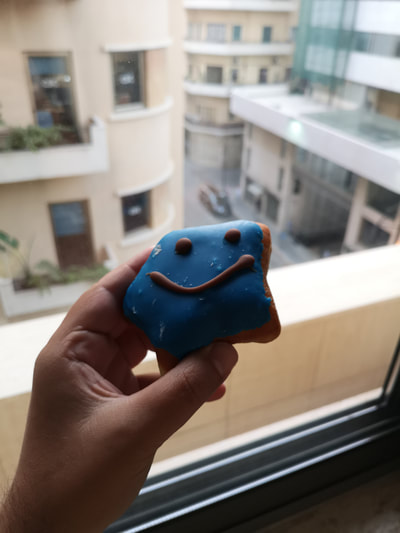 AlYou could see the sea, then A LOT of green, then the buildings of the city, it was like a three-layered cake. I have two pictures of the people at the beach in the gallery above, and still you cannot grasp at how many of them were there.

Walking closer towards our destination, there was the Rafik El Hariri memorial which was a, seemingly made of sandstone, balcony-like monument with all the skyscrapers and tall modern buildings surrounding it. Traditional and modern blended so nicely. Then after some more walking we finally got to Zaitunay Bay. You cannot understand how majestic it all looks until you see it at night. When we visited it the first time it was a great, elegant, iron-heavy bay with a row of restaurants and cafes and yachts at the port.

Side note: Taxi cabs and cars that may or may not be taxi cabs keep honking at you in case you want a ride. That's what causes the biggest part of the noise in Beirut.

All this walking resulted in an exhausting walk back to Studio 44 but, hey, at least we encountered the more poor part of the city, in buildings that are ready to come crumbling down but you see people living in them (gallery above). We returned to the hotel and slept for four or five hours. It was 1am when we woke up and we were hungry as usual because Dunkin Donuts are amazing but not enough, so the very friendly receptionists suggested Barbar 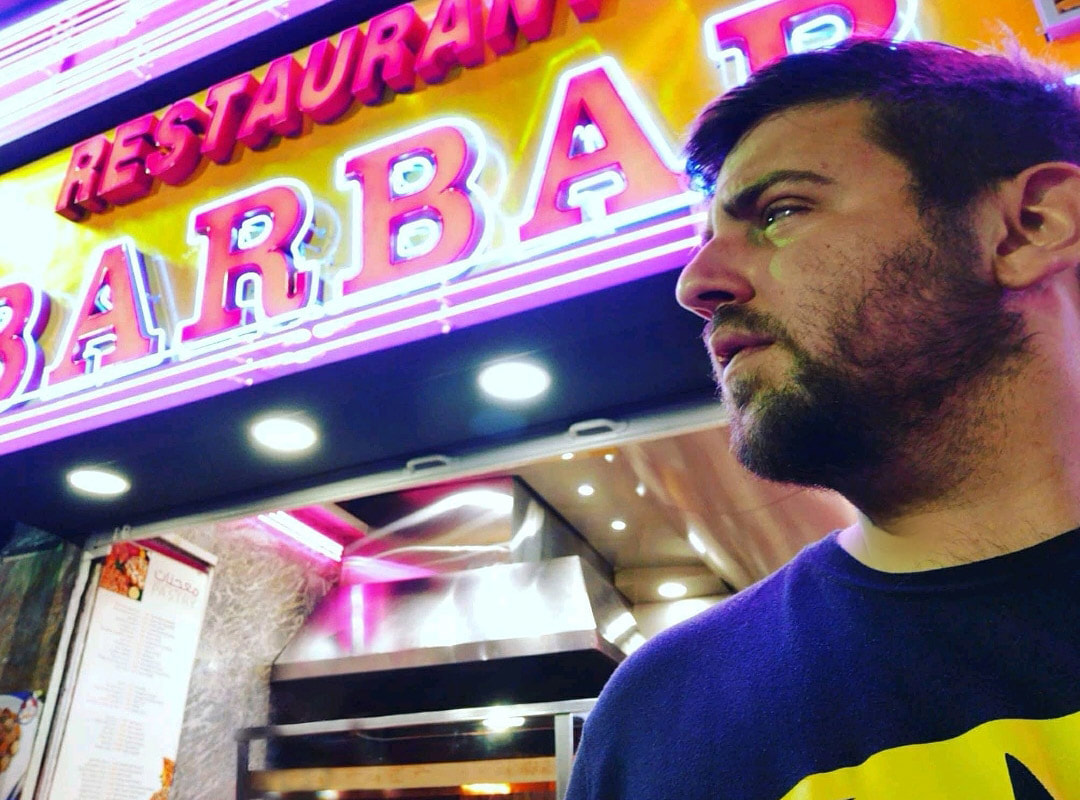 It's not just a bar, its a Barbar.

It's basically four Barbars, one in each corner of a crossroads near the Hamra street, and its a 24/7 fast food with kebab, burgers etc. Of course I wanted a picture with the bright lights. Mick made fun of me. The picture is awesome. Mick was wrong. I tried chicken kebab with fries and a sauce that tasted like a garlic-loaded tzatziki and it was good (besides the garlic overload). Next we wandered around in Hamra, it was after 1am and the streets were alive with no sound of music.

Next day we walked again. This time on the upper side of the city which was basically the old city. We were looking for a pool and we found it three hours later and after a very angry taxi driver drove us there.

At La Plage you basically swim in a pool, in a balcony that oversees the sea (gallery below). We had lunch at Roadster, at Zaitunay Bay, where I ate one of the best hot dogs, with melted cheese (gallery below) and then visited Souks which is a great mall that perfectly blends the traditional architecture with a modern twist.

You know what makes Beirut so unique? It mixes nature and urban, old and new. It's like the city is being rebuilt from the outside to the inside; like the old city is enclosed by the super modern cover. You could feel that even more if you visit Zaitunay Bay at night. The modern buildings have lights that make the city look futuristic. 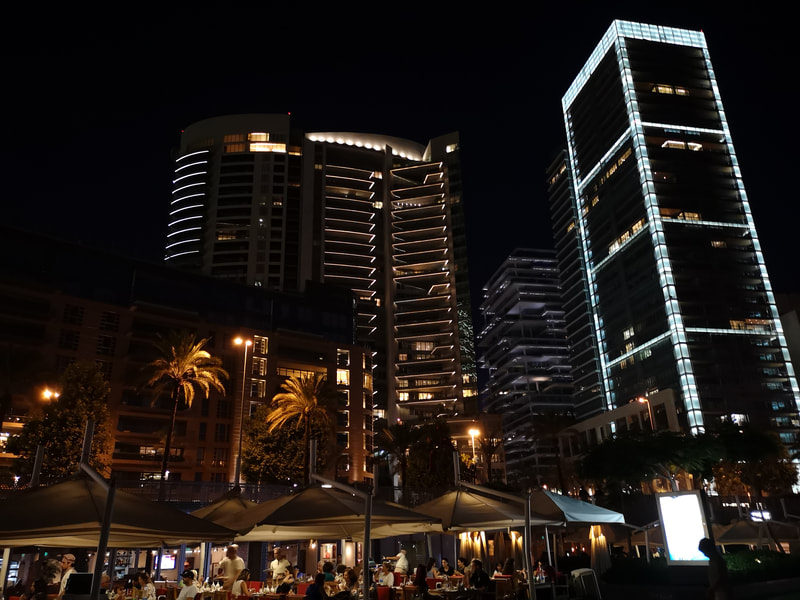 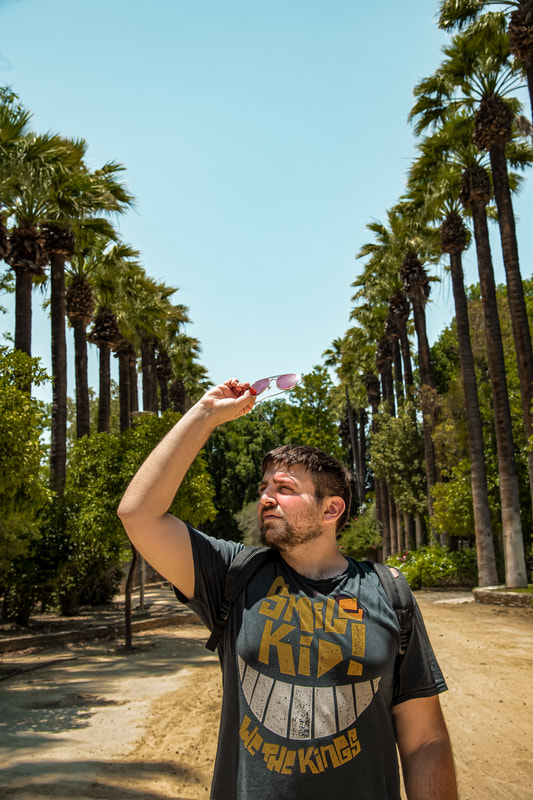 At night I drooled over Chocolate Bar and the triple brownie covered in Belgian milk and white chocolate and stuffed with strawberries and bananas and mascarpone cheese. No sir, I cannot describe its taste with words. You have to try it.

Pigeon Rocks (or Raouché) are two gigantic rock formations in the sea, and if you go there make sure you go down on the rocks for a better view of the Pigeon Rocks (say NO to a boat trip and when you see the actual boats you will understand why) and enjoy.

It was time to start walking and searching for Mar Mikhael. We had 9km of walking in humidity ahead of us, and we had no idea. We actually crossed all the bay again, passed Zaitunay Bay, walked by the city borders with soldiers guarding it, we went in the highway, crossed an old, dusty and eerie bus station, got into the highway again, went under a bridge so we could cross the highway, walked uphill to a brand new neighborhood that was apparently Mar Mikhael. It's the most artistic part of the city, with nice cafeterias and galleries and some street art here and there. It was also very quiet, in contrast to the rest of the city. It felt like a small neighborhood, and the people were quietly minding their business.

After ten or fifteen minutes of us looking around the neighborhood, we finally found our oasis: the colorful staircase.

That's about it. We took pictures there and we walked a lot to get there.

We returned to the city, exhausted but we kinda loved every second of it. What's a travel without an adventure?
​ 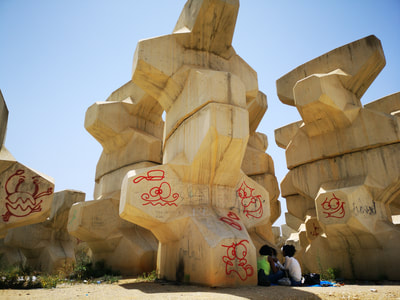 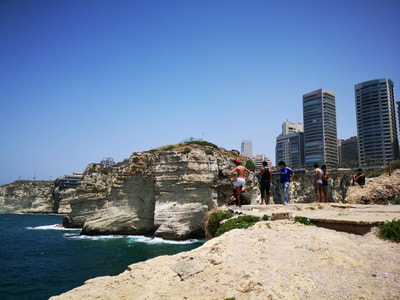 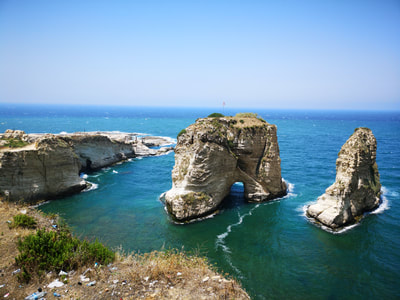 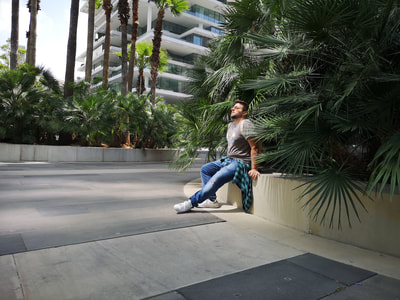 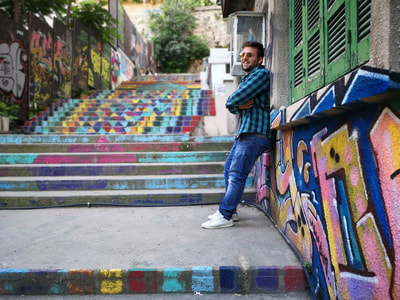 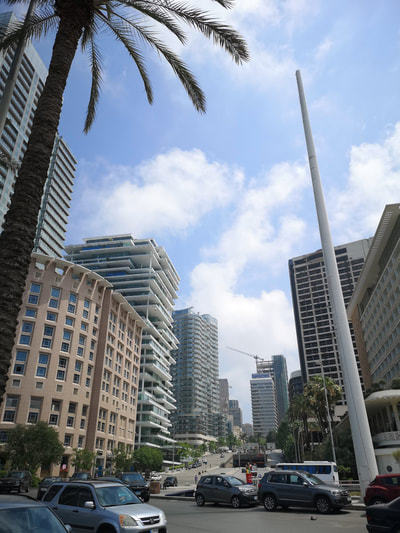 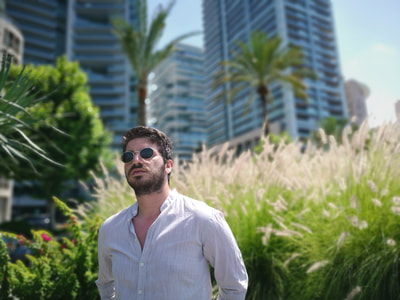 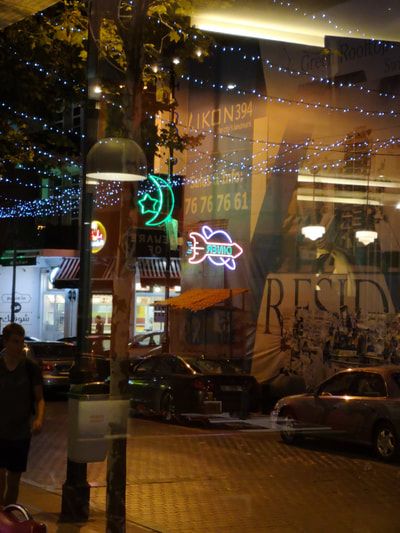 For our last dinner in Beirut we chose the Deek Duke (I will never be able to say that name without giggling). Great restaurant that mixes food like hummus with chicken wings and chicken tenders. We tried all of them.

All in all, Beirut is unique. Taxi fares depend on the mood of the taxi driver, there's a lot of cars honking on the street, humidity but its also architecture, food, young people and religion. Come to think of it, for all the walking that we did, we took quite a few taxi cabs.

The song pick could not be anything else other than this: