You have to understand one thing first. From the second I booked the tickets to Bucharest and until we arrived at the hotel, I was singing George Ezra's "Budapest" but with "Bucharest" instead. So we had to find another song to get addicted to. And we did, and you will see it in the end of this page.

It was about time I traveled with my mum and sister and for this post, they're Mum and Sis. We arrived in Bucharest at night and the first impression is that it's very European, the buildings, the people, the vibes. On our taxi cab ride to our hotel, we noticed there are great big areas of dense trees between the buildings. The taxi driver drove around the address we gave him, searching for Upstairs Boutique.

He eventually pulled over when he found the number. I want you to feel the next paragraph so I'm going to be very dramatic:

It was dark. The facade was an old and rusty building, with a banner that read "Cinema Bucuresti", with no lights at all and the front door open. It looked deserted. The taxi driver was laughing as he brought us our baggage and he kept laughing up until he got to his car and left.

There was little light on the street. Mum was already worried. We walked in the front door and there was a deserted hallway that led to another door. At the end of the hallway and on our left was an old and dark marble staircase. Sis checked, no hotel in sight. We passed through the second door to get to the small yard (which was beautiful). Still no sign of life. Right across us was a zig zag iron staircase that led to a balcony. We followed it and entered the door on our right where some light was visible. Now things were getting a bit more optimistic. There was a small sign that sent us at the last floor. Round and narrow staircases but refurnished and clean. White hallways, plain decor. At the end of the hallway of the last floor was the owner's office.

The dramatic mood ends here, the guy was very friendly and our rooms were great, clean, tidy, new etc, with windows that overlooked the yard. To be more specific, it was a huge building, half of it was Upstairs Boutique, the other half was an apartments' building or something like that. Once we got to know the place, we felt right at home. The rooms were cozy, the owner and the staff were friendly, the weather was cool. . 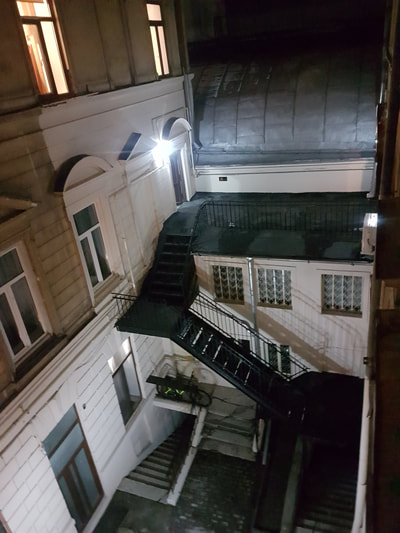 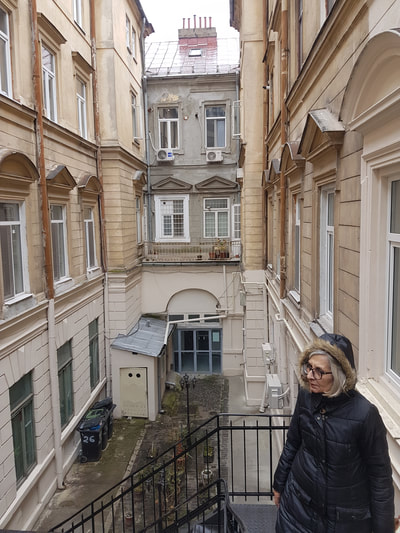 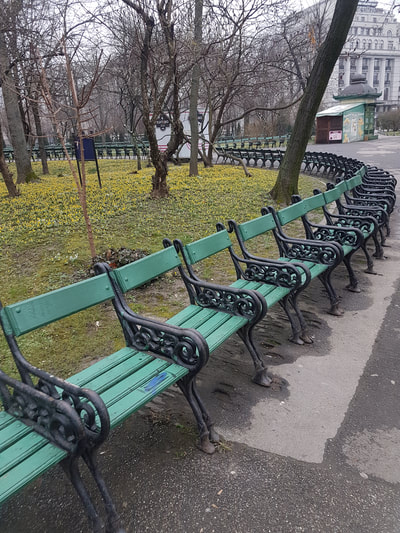 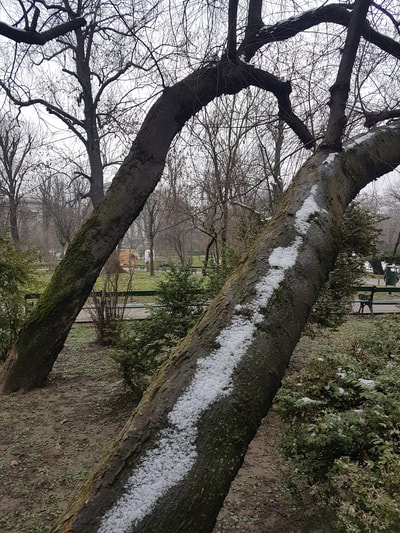 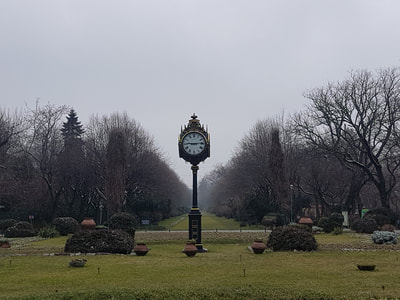 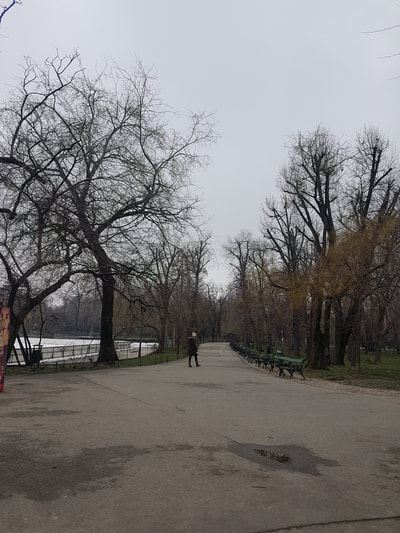 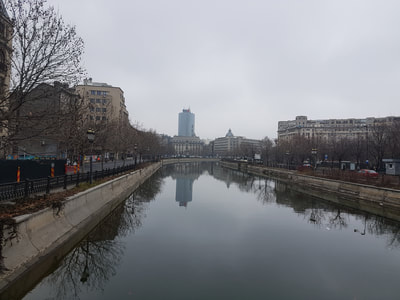 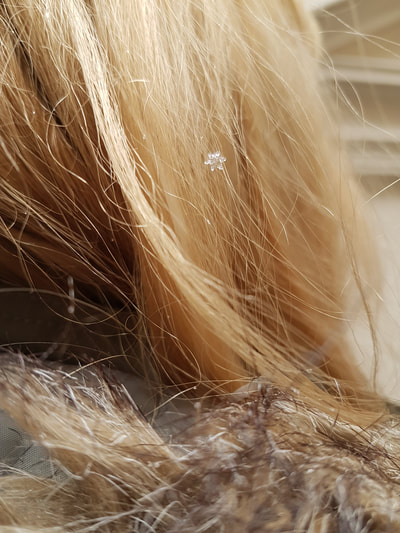 Day 1:
​
The breakfast hall was like an apartment in an attic. Still cozy, still nice.

We went outside, the weather was perfect; not very cold, not hot at all, it was February after all. We walked down Regina Elisabeta street (our hotel's street) and ended up in the park Cișmigiu. There was some snow left on the tree logs which was a good sign. I love snow. The park was endless with a frozen lake, trees, benches and a clock straight out of "Alice in Wonderland" (see gallery above).

We took the first exit, crossed the main street and strolled in the city. After a while, Dâmbovița laid in front of us. This river comes from the Făgăraș mountains and expands in 286km. Then we headed back, passed by Cișmigiu to get to the National Museum of Art. Mind you, the city center was crowded and full of life despite the grey skies. People were everywhere but they never bothered you, they went their ways without even glancing at you. Bonus points. 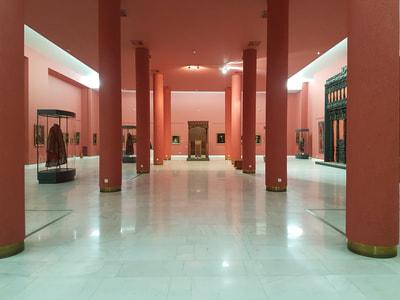 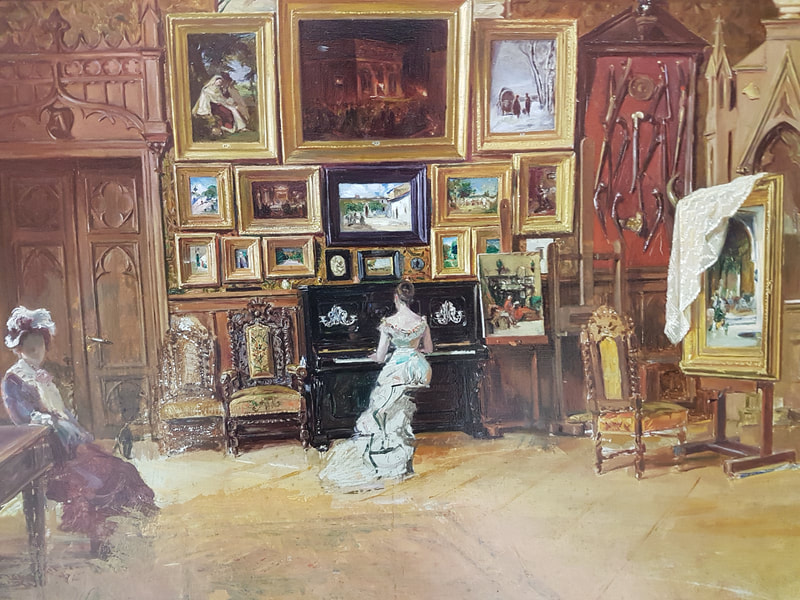 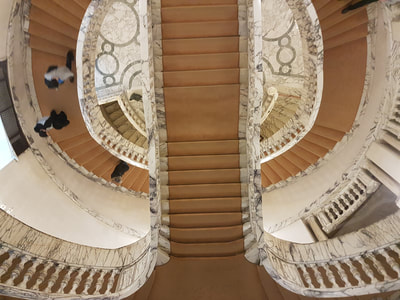 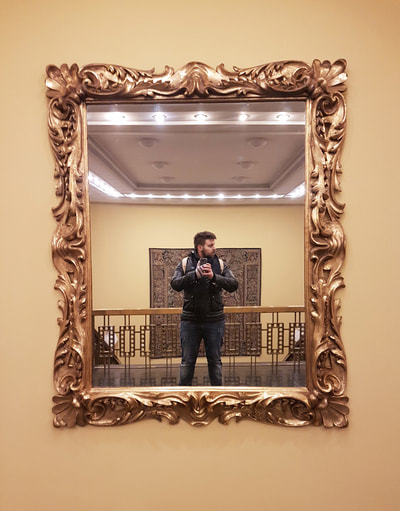 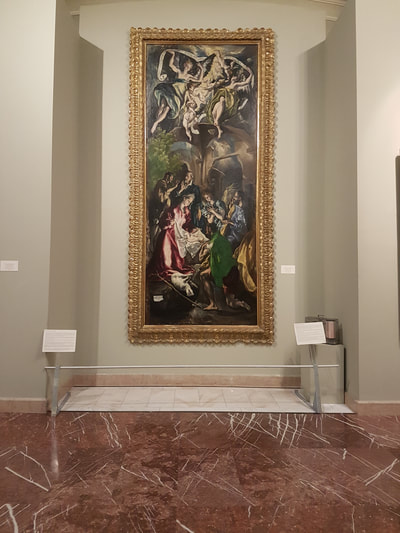 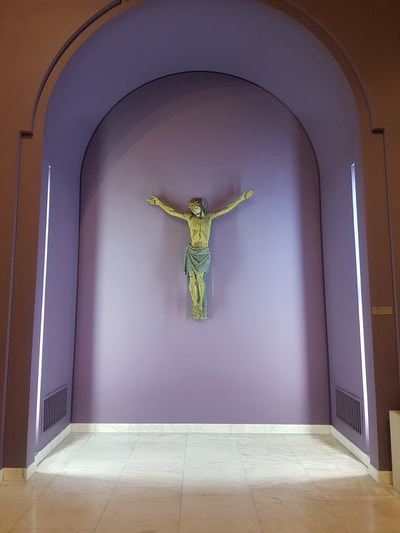 The museum was enormous. Split in two; the European building and the Romanian building. First, at the European, there were work from the most famous painters of Europe, from Victor Brauner and Max Hermann Maxy to Rembrandt and El Greco, you name it, everyone was there. It was exceptional art from start to finish, the walls, the wallpapers, the furniture, the magnificent staircase that kinda reminded me of the "Harry Potter" movies. Remarkable collection and a must visit.

On our way back to the hotel, we discovered the Pasajul Victoria which is an alley that had colorful umbrellas instead of a roof, then there was the great Novotel which is a traditional building with an amazing mirror facade.

At night it was time for PAUL. I don't think I need to say anything more, the picture below speaks for itself. The search for a Starbucks (I collect the Country Mugs, I buy one from every country) led us to the old city center. The streets were now covered in snow and it was still snowing, but people were not going home. There was so much life in the streets despite the low temperature.

That was the day we were expecting. We booked our tickets to the Therme and we took the Therme Bus that would lead us to a palm-tree filled paradise (it's located in the northern area of the capital).

The Palm was waiting for us and it was an extraordinary experience. When I was booking the tickets online I read some reviews saying the staff was rude and that we should be careful because we pay for everything extra as if they are slyly charging you for every single thing. Everybody calm down. Everything was perfect.

It's a wellness center with relaxation pools and thermal waters. The inside pool is around 30 degrees Celsius but you can swim outside through a revolving door in the pool. There you will experience an incredible contrast with your body in the hot water and your head confronting the cold air of February. Everything below the surface was warm and everything above the surface was cold. It's highly addictive, I don't know how long I stayed there (the tickets were for a three hour visit). You must experience this at least once in your lifetime. 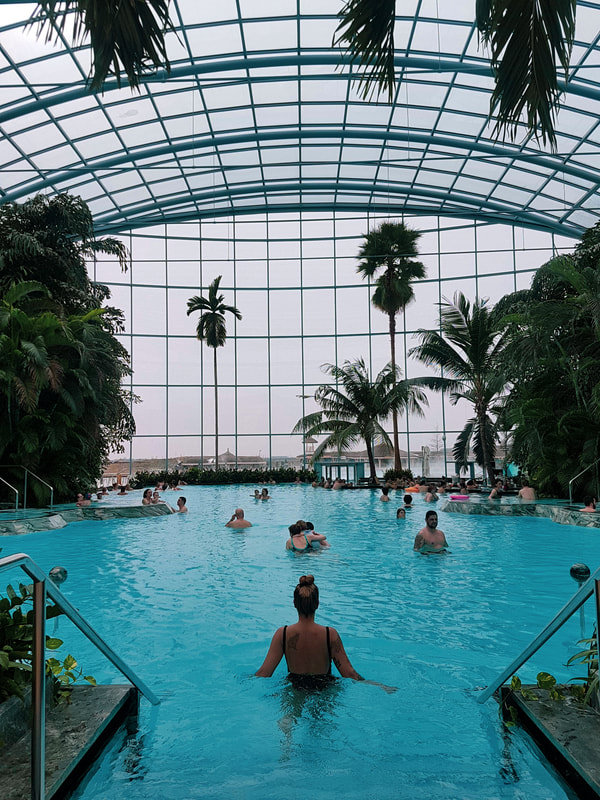 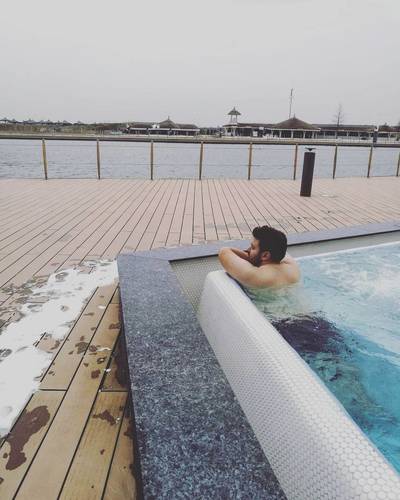 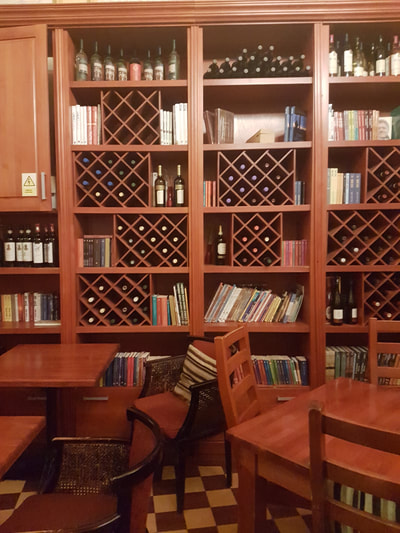 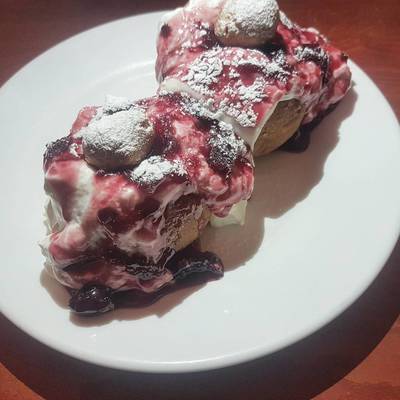 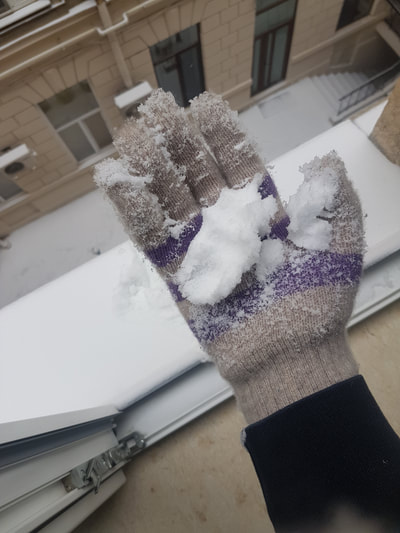 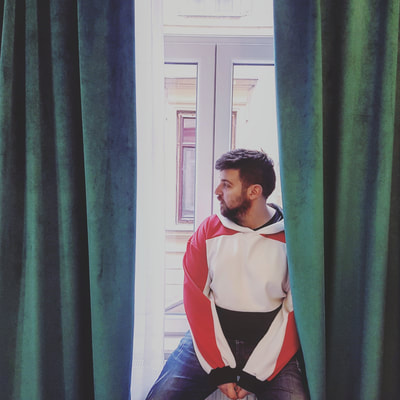 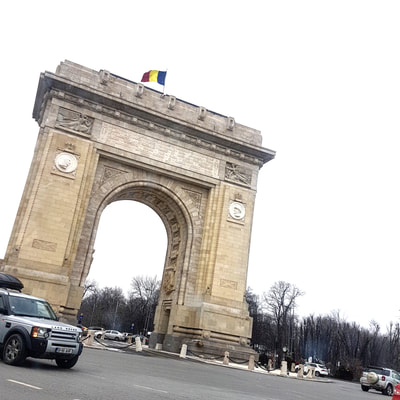 For the night it was time to taste tradition. The cozy little La Mama served us with ​Papanași which are big fried balls covered with marmalade and cottage cheese (see gallery above) and just the thought of it make me drool all over again.

Our last morning was white. Everything was covered in snow and the temperature were at its lowest (-9 degrees Celsius if I remember correctly) so it was time to go home.

TIP: Use Star Taxi App if you want a taxi.

Bucharest is peaceful and makes you feel like home straight away, whether you're travelling with family or friends.

Those were my 48 hours in Bucharest (okay a few hours more than that, but who's counting?)

And now, the song I was talking about at the beginning of the post; is an addictive Arabic song about Bucharest. Behold.